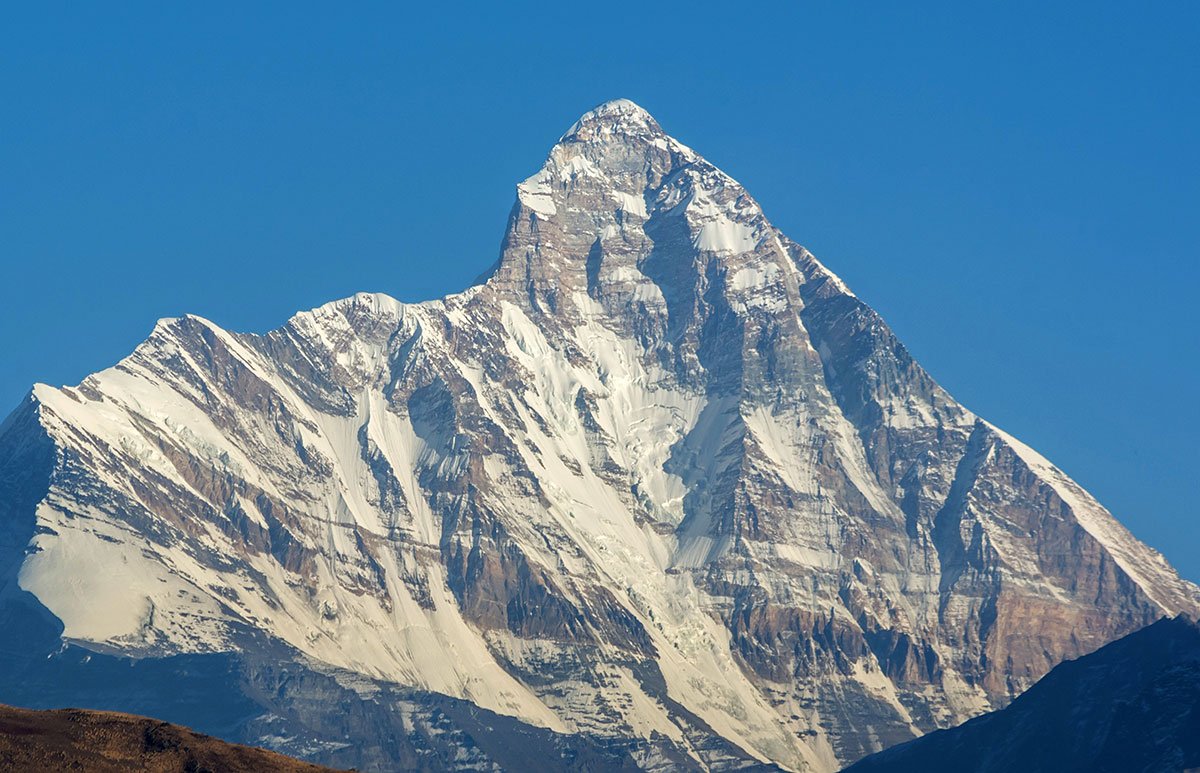 In the previous newsletter I briefly explored why mountains capture our imagination and touched upon some of the mythology and religious significance of these vertical environs.  In this edition I’ll delve into one mountain steeped in the Hindu pantheon: Nanda Devi.

Located in the Garhwal range in the Himalaya, Nanda Devi is India’s highest peak and, at 25,643 feet (7816 m), is the world’s 23rd tallest peak. It is a sanctuary and home to the deity Nanda Devi (“bliss-giving goddess” in Sanskrit).

In legend, Nanda was a beautiful princess who was not interested in the amorous pursuits of a neighboring prince — nor was her father the king. The prince became enraged by Nanda’s rebuff and took his revenge by invading their land and defeating the king. He searched for the princess, intending to take her by force but Nanda fled, climbed the peak and merged with the mountain. She was deified and is known to be an angry goddess when threatened or offended. Events in the region often begin with a prayer or offering and there are multiple shrines dedicated to Nanda Devi.

The majestic peak has also attracted mountaineers and in 1976, it was the location of a tragedy.

In 1934, after a half-century of cumulative explorations, a team of British climbers (Eric Shipton and H. W. Tilman) finally discovered a route through the treacherous Rishi gorge and were able to access the inner ring, known as the Sanctuary, surrounding the two-peaked massif. In 1936 a British-American expedition (Noel Odell and H.W. Tilman) reached the summit. At that point in time it was the highest summit ever achieved; and remained that way until 1950, when Annapurna was successfully climbed (Mount Everest, the world’s highest, was first summited in 1953).

In 1947, Willi Unsoeld, a twenty-one-year-old penniless wandering American mountaineer saw Nanda Devi from an adjacent valley and was so captured by the beauty that he vowed on the spot to find a wife; have a daughter and name her Nanda Devi. And in 1954, he and his wife Jolene welcomed Nanda Devi Unsoeld (‘Devi’) into their lives.

Willi kept climbing. In 1963 he was part of a Mount Everest expedition in which he and Thomas Hornbein achieved a first ascent via the extremely difficult west ridge. Forced to bivouac at over 26,000 feet they came down the south route, frostbitten and exhausted. Although he nearly died and lost nine toes to frostbite, Willi’s passion for high-risk adventures was undiminished.

In 1976, Willi Unsoeld and his daughter Devi were part of a thirteen-member expedition to climb a new and difficult route on her namesake. As a 22-year-old mountaineer it was the trip of a lifetime.

Before the party arrived at the mountain, however, there were fractious disagreements about gear, the route, and even toilet paper. Once they set foot on the mountain, and faced the stresses of the steep terrain, avalanches, and storms, these party fissures deepened.

The early days of climbing witnessed several near catastrophes from avalanche and rockfall.  Intense arguments flared as personalities and egos clashed. After a month of difficult climbing and building successively higher camps on extremely steep terrain, they’d succeeded in setting up camp four, some 24,000 feet above sea level. The first summit team of four climbers made the summit and came back to camp four jubilant.

The first summit team descended to camp three; and the second summit team, which included Devi, climbed up to camp four.

Devi, who had been ill with dysentery, became exhausted. For almost a week, a storm pinned them down; Devi worsened and began hemorrhaging into her gastrointestinal tract. Despite the storm they decided to get her down to camp three. As they were preparing to go she suddenly said, “I am going to die.”

Three years later, Willi was leading a group of undergraduates on a winter climb on Mt. Rainier, when he and a student were killed in an avalanche.

This tragic tale of father and daughter is detailed in the book Fatal Mountaineer by Robert Roper.